Note: This post is adapted in part from my guide to contributing to the Git project, which you can read here. I owe my thanks to my reviewers there, including Junio C. Hamano, Johannes Schindelin, Jonathan Tan, Josh Steadmon, and Phil Hord.

Five weeks ago, I joined a new team at Google, and began contributing to a new project: Git. I was (and still am) thrilled to be working on a piece of software used by countless developers across the globe! To gain a deep knowledge of a tool I’ve evangelized for so long!

But then I subscribed to the mailing list, and it truly began to sink in to me that for the forseeable future, I could expect my mailbox to look something like this: 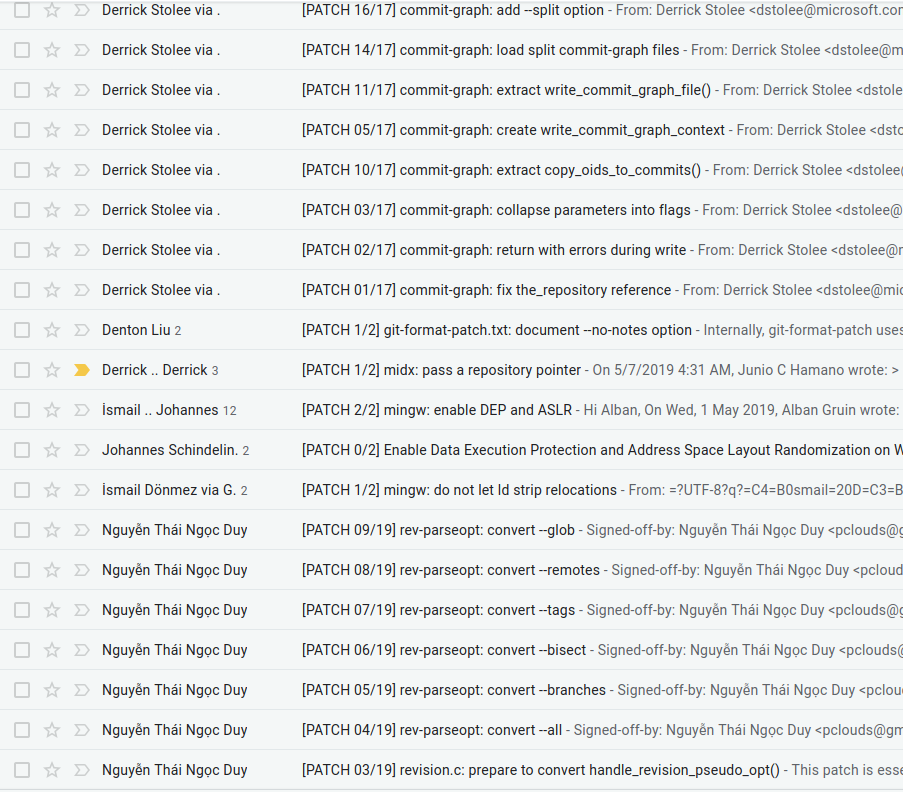 Out of My Element

When I started writing code professionally, I worked on a team that used Gerrit. I liked it well enough that I continued to recommend it when asked; an iterative review UI based on Git, who could ask for more? At my next company, code reviews were performed by another developer examining your ClearCase checkout and sending you an email about it (yikes). Later I was asked to evaluate Team Foundation Server’s built-in review tooling for another company, on a team which insisted that “code reviews take valuable developer time” - and, as a result, generally didn’t perform them. Then I was lucky to fall back into a team using Git alongside a proprietary review tool, and then, back to my roots: Git and Gerrit on OpenBMC, and Gerrit for our internal fork, too.

This whole time, I figured no matter how bad the review process was, at least it wasn’t emailed patches. Why does anybody still use that terrible workflow? Who would want to review a diff line-by-line in their email client?!

I was envisioning someone painstakingly copying a diff from an email body and pasting it into apply. Or carefully making a second copy of the altered file and running diff -u, and then handwriting the subject and commit message.

Of course, nobody does that. It’s absolutely true that no developer today - let alone the bash-happy Unix devs of yesteryear - would use that workflow. With some tooling and good practices, I found a workflow that I love - and found myself arguing in defense of emailed patches!

git format-patch to the Rescue

Perhaps unsurprisingly, since the Git project itself is organized via emailed patches, Git has some excellent built-in tooling for preparing your commits for the inbox. git format-patch is the most notable - with it you can prepare an entire branch for mailing, include a cover letter, indicate a Request for Comment change, generate updated v2 or later patches, and more.

It’s easiest to use git format-patch if you’ve been working in a feature branch (which you always do, right..?) - for the purposes of the tutorial, we’ll assume the main branch of the project is master and your feature branch is feature; we’ll also assume that feature has been recently rebased onto the tip of master.

Imagine that you’ve got only one commit in your feature branch. Typically projects like to see individual patches sent as a single email with no cover, with a subject like “[PATCH] component: my great feature”. Make sure that your working tree is clean - that is, everything you want committed is committed - and run the following.

Now take a look in feature-patches/. You should see a single file named something like 0001-component-my-great-feature.patch. If you open it up in your favorite editor (I like Vim), you’ll see an email header, your commit message, a diffspec, and a unified diff indicating your changes.

Ideally, your commit message should say everything there is to be said about your patch. But sometimes, there’s some context you want to add that isn’t appropriate for a commit message - for example, maybe you want to warn everyone that you won’t be addressing comments until next week as you’re visiting your aunt in Mallorca and she doesn’t like to give out her wifi password. In that case, look for the --- above the diffspec - you can provide your additional message there. It will look something like this:

Great. You can see in the example which parts of the email will be retained as a commit message, and which parts will be ignored by git am. If you’re not sure how it will look, you can always try running it through git am yourself to have a look at the resulting commit.

If your organization likes even single-commit changes to contain a cover letter you can just use the instructions in the next section.

If you’ve been working on a much larger feature and your branch has a number of commits, you can still use git format-patch pretty easily. Like before, make sure your working tree is clean and your commits are all in order, then run

Have a look in feature-patches/. You should see n+1 patch files (where n is the number of commits you have on top of master). Most of them will reflect the subject lines of your patches, but there will be one named beginning with 0000 - that’s your cover letter. Go ahead and open it in your favorite editor.

You should see that it’s already got a template, including some email headers and a diffstat. Change the subject line to something that summarizes your entire feature, taking care to preserve the “[PATCH 0/X]” portion. You can also include context in the body of the cover letter to explain anything about the patchset which wasn’t appropriate for inclusion into the commit messages. For a larger changeset, this is typically the place where you explain what your feature is as a whole.

If you examine the other patches, you will see that they are all marked In-Reply-To the Message-Id of your cover letter. This is good and what most communities prefer, but you can change the behavior with the --thread argument.

Some Tips for Format-Patch

Show Them What You Got: git send-email

Note: One thing this tutorial won’t cover is how to download and configure git send-email. Not because it’s hard, or trivial, but because setup steps vary quite a bit depending on your system and email client. send-email is often not packaged with base Git; you may have to install it separately. This tutorial assumes you’ve already got it up and running.

After the steps in the previous section, you should have one or more patch files in your feature-patches/ directory, and you should also have examined your patches to ensure that they look perfect and ready for review. Sending them is as simple as this:

That’s it! Your patches are out and your reviews should come pouring in. (Okay, maybe “trickling” is a better word.)

Note: As with Gerrit and other iterative code review tools based around a Git workflow, making your changes involves using interactive rebase. I won’t cover that here, as it’s not significantly different from other processes, and it’s complex enough to take its own tutorial.

Your reviewers will likely provide their comments inline, and it’s often good manners to reply to each review comment indicating whether you’ve taken an action or not. When I’m replying to review comments, I like to have a window open with a reply to the email, and another window open with my code. I make sure that I’ve begun an interactive rebase and paused to edit the commit I’m examining comments for, and then I open my source file. As I read comments in the email, I make a change as appropriate in my source, then type a response inline to the comment in question. (That way I know I didn’t miss anything!)

When you’ve addressed all the comments for a certain patch, make sure to git add -u && git commit --amend to update your commit with the changes. Once you’ve updated your entire branch this way, you’re ready to send v2.

(You should include --cover-letter if you’re sending more than one patch. For a single patch, you should omit it.)

Take a look in feature-patches/. You should see a new set of patches next to the old ones, this time preceding with v2-. Edit the cover letter or patch body to include details on the changes since v1.

As long as you’ve got In-Reply-To: set up correctly on your single patch or cover letter, you can send almost just like before; just make sure to target the v2 patches:

There you have it! Emailed patches aren’t so bad with the help of a couple handy Git tools. While they’re a little bit more effort than a push to Gerrit, I’d argue that the time spent editing the cover letter is about equitable to the time spent writing the message associated with the review in a graphical tool. Plus, the ability to perform reviews via email means you can get really wild and set up something like mutt so you can both review code and respond to reviews of your own code within your favorite editor - and is there anything that isn’t made more fun by the addition of Vim keybindings?